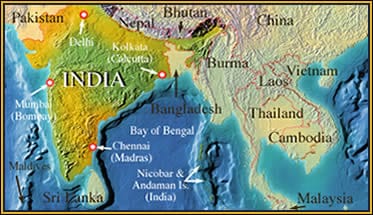 Location: King cobras in India are found primarily in the Orissa swamps to the southwest of Calcutta and the Western Ghats to the west of Chennai (Madras).

Mark sets out to investigate the many myths surrounding snakes in India. Local mythology states that if you kill a cobra, its mate will come and kill you in revenge. Perhaps getting to the bottom of this famous cobra myth will reveal something about a snake Mark has never caught in the wild, a snake that delivers enough venom to kill ten men, the King cobra.
Finding the rare and elusive king of snakes isn’t easy, but if Mark succeeds he may be able to determine at first hand whether they are indeed ‘special snakes’, whether they have a quality he has never previously encountered in all his dealings with serpents, intelligence.
He joins Mohammad Anees, an Indian snake expert, who has captured over 4,000 cobras in and around India’s high-tech software capital Bangalore, to discover how dangerous snakes and people live close together in this busy city. A common feature of life in India, this might help explain why over 10,000 Indians a year die of snakebite.
The aim is to capture common and king cobras and using techniques and sounds recorded by reptile acoustics expert Dr Bruce Young, determine whether cobras, and king cobras in particular, can actually hear airborne sounds. The common belief is that snakes do not hear airborne sounds but if that is the case, why does the king cobra growl? Could it be so a king cobra in distress could call other king cobras for help? Could this be a scientific basis for the cobras revenge myth?
Mark, Anees and Bruce visit two Indian king cobra hotspots in an attempt to capture king cobras for Bruce’s auditory tests. They travel to the remote, crocodile infested mangrove swamps of Bhitarkanika in the northeast, and then venture into the mountainous jungles of the ancient Western Ghats to the southwest. In this region the local people hold king cobras in such awe and reverence that even in death they are given the same rights as departed relatives.
If Mark does succeed in coming face to face with a wild king cobra for the first time in his life, he’ll be able to see for himself whether locals are right when they say it is easy to get lost in the eyes of this remarkable snake. Maybe this, rather than snakes calling each other for help, is the key to the secret of the cobras revenge myth…. 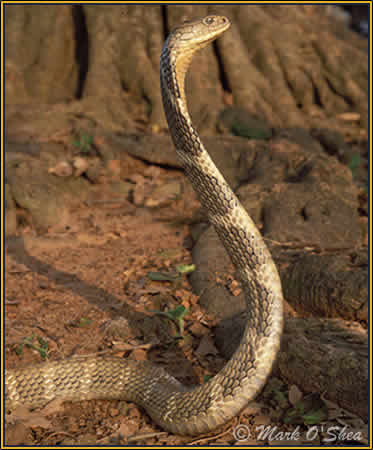 A large King cobra (Ophiophagus hannah) is one of the most impressive snakes in the world.

Species recorded during ‘The Cobra’s Revenge’