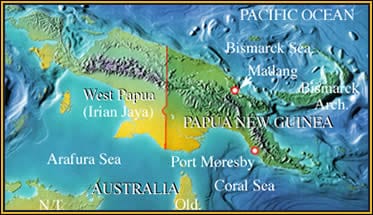 Mark O’Shea has been visiting Papua New Guinea and studying its herpetofauna (reptile and amphibian fauna) since 1986. He has a particular interest in the snakes of PNG, the eastern half of the second largest island in the world, and especially the venomous snakes, and he wrote a book on the subject. The primary aim of Mark’s previous visits to PNG has been to capture the species responsible for killing people and extract their venom for analysis, hopefully leading towards a better treatment for snakebite victims. One snake recently implicated in snakebite fatalities is the poorly known New Guinea small-eyed or Ikaheka snake. This highly venomous snake poses a serious risk to plantation workers on the volcanic island of Kar Kar off the northeast coast of Madang Province. Mark has visited Kar Kar several times in the past for the purpose of obtaining small-eyed snake venom and discovered that reptiles, including snakes, have taken great advantage of the discarded piles of coconut husks left by plantation workers from the copra industry. But before Mark returns to Kar Kar Island he travels to Kunini village in Western Province, a village he last visited in 14 years earlier where he caught his first Papuan blacksnake, Pseudechis papuanus, another highly venomous PNG snake. This was also where he was given the Motu name of Gaigai Tauna, ‘the magic man with power over snakes’. 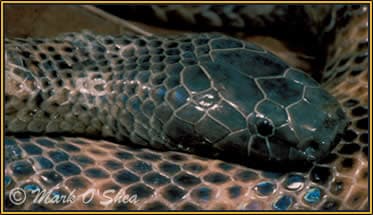 The Small-eyed snake (Micropechis ikaheka) is a secretive, nocturnal and highly venomous snake that poses a serious threat the plantation workers working barefoot.

Species recorded during ‘The Magic Man’