VENOMOUS SNAKES
OF THE WORLD

AMAZING PRICE REDUCTION
CHEAPER THAN AMAZON !!
YOU SAVE £5.00
NOW ONLY £9.99
AT THE SPECIAL HERPSALES PRICE 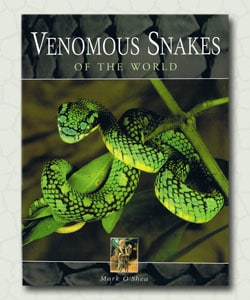 160 pages
over 170 detailed species accounts
over 180 full colour photographs
and a Foreword by Prof. David A. Warrell, Centre for Tropical Medicine, University of Oxford

Publisher’s synopsis: Mark O’Shea has combined expertly written, in-depth descriptions of the world’s most common and most exotic venomous snakes with a gripping account of his adventures with snakes, including several serious snakebite episodes, which have taken place all over the world. From the few European venomous snakes, such as the Adder, to Rattlesnakes, Cobras, Taipans, Mambas and Sea snakes that inhabit other countries, all the major snake species are covered. There are also chapters that explain venomous snake evolution, types of venom, the effects of venom, and discuss the problems with snake conservation.No matter how fearsome these creatures might appear, they all play a vital part in the natural world as both predators and prey.Illustrated throughout with spectacular photographs, many of them the author’s own, this book celebrates the diversity and beauty of snakes worldwide.

INTRODUCTION: Anatomy of snakes; Venomous snake diversity and distribution;
Snake venoms and their actions;
Life in the sea; Conservation and Venomous lizards.