“What about going to search for the Siamese Crocodile in Thailand?” The YAP researcher had been burrowing in the internet when he hit on the story. It sounded great- but what he didn’t tell me was that there were less than 10 wild crocs in the whole of Thailand. Formerly Siam (hence the croc’s name), Thailand is twice the size of Britain or for Big Adventure viewers larger than the state of California. Now that’s a handful of creatures in a very large territory. We like a challenge on Dangerous Reptiles/Big Adventure, and by God we got one! 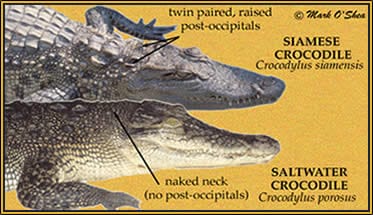 Siamese crocodiles possess a pair of raised post-occipital scutes on either side of the neck which are absent in the Saltwater crocodiles which is sometimes called the naked-neck crocodile. There are other differences ie. Colour, patterning, leg and cloacal scales, but hybrids can possess a mixture of characters making DNA the best way to determine pure Siamese crocodile stock.

Siamese crocs are thought to grow up to 13 feet long with formidable dentistry. Thailand’s rivers used to be stiff with crocs until businessmen spotted a profitable line in shoes and handbags and started trapping them for crocodile farms. Now pretty well the only place to find a croc in Thailand is in captivity. It’s a bizarre reversal – plenty of crocs in the farms, virtually none in the wild. Then a guy called Tony Lynam from the Wildlife Conservation Society accidentally took a mysterious photograph of a Siamese croc using a movement sensitive camera trap. It was a big animal too – between two and three metres. So we set off to try and find evidence of more of these critters on the Phetchaburi River in Kaeng Krachan National Park where the photo was taken. We travelled with Tony and also croc biologist Yosapong Temsiripong who had an ambitious plan to put captive crocs back into the wild.

But it seemed like the gods didn’t want us to find a croc because we were frustrated at every turn. The site where the photo was taken is accessible only by river. First of all, our recce to check out the river had to be cancelled because of a military operation. The national park chief informed us the Thai army was sweeping the forest to flush out armed men who had crossed the border from nearby Burma. This created all kinds of logistical problems. When we set out to film we didn’t know how long the journey would take nor what we would face in the way of white water rapids.

In addition we decided that a doctor was essential for the journey. If O’Shea took a bite it would be at least 12 hours before we could get him near a hospital. Evacuation by chopper was out of the question because of the extraordinary steepness of the river valley. Eventually we located a Thai doctor who was up for the trip. Dr.Chukiat had some unusual ways to spend his spare time in the forest. Every morning he’d sit with his trousers rolled up to attract the numerous biting insects which always follow us around on O’Shea trips. But Chukiat was a scholar not a masochist. His collection of biters, stingers and suckers found it’s way back to a university lab in Bangkok to educate his students.

Thankfully Dr.Chukiat was around to treat cameraman Mark Stokes who fell painfully damaging knee ligaments on a hazardous trek upstream to check out a recent crocodile sighting. Because of the illusion of television, it’s hard for an audience to realise the sheer physical challenge of mounting an operation like “Siamese Crocodile”. It was more like an expedition than a telly programme. 8 boats and 23 people. And people in extreme circumstances get injured. Our cameraman was hobbling for a week after his accident. It didn’t help that he was forced to film from moving boats going down rapids with his leg in unbelievably crooked positions. And try running towards a snake or away from an elephant with damaged ligaments.

To add insult to (his) injury, Stokesy nearly smashed his DV camera filming farm-bred crocs up close. As he lowered his camera on a pole to within inches of a crocodile’s jaws, we were all salivating over the shot when the croc spoiled the party with one violent swipe of its head. It’s still a great shot- and it’s in the film!

Thankfully the evenings on the river offered some relaxation…of a sort. We slept in hammocks assaulted by leeches. One morning I got up for breakfast to be greeted by hoots of derision and people pointing at my face. I’m used to this at home from my son but only later did I realise a huge leech was feeding from my eyebrow. Colonies of ants rapelled doggedly down the ropes attaching the hammocks to the trees and built highways into our sleeping bags. At least we could relax and watch episodes of the cult British comedy show “The League of Gentlemen”. Surely this is the weirdest of environments to watch TV? – a rainforest at night surrounded by cicadas and disbelieving Thais. Surreal.

There’s always a “most thrilling moment” on an O’Shea shoot. For me it was on a night shoot. We were searching for crocs in a small rubber boat by looking for the reflected light from their eyes. It was pitch black when we hit some pretty tasty rapids. Suddenly we were deafened by white water and pulverised by overhanging tree branches. The boat was bucking like a wild horse. If the worst happened and we pitched into the river would the crocs be waiting? Another of those Big Adventure moments which makes you realise how good it would be to stay alive! See it on TV.