Director’s notes: In the Python’s Grip

Mark O’Shea is a remarkable man, driven to find and capture reptiles to further his scientific knowledge. Travelling with him is always eventful. In the past three years I have been lucky enough (if you call it lucky) to be less than four feet from Mark when he decided to bring a seven-foot alligator into the boat we were on to protect some turtles we were studying. I’ve also flown a plane across the Amazon, caught and cooked wild piranha fish and caught some of the biggest snakes I have ever seen. 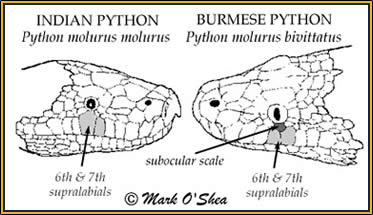 From these line drawing of living python’s head scales it is possible to see how the subocular (under-eye) scale of the Burmese python separates the supralabial (upper-lip) scales from the eye. This is not the case in the Indian python.

Our trip to India in search of Indian and Burmese rock pythons was no exception to the rule that when Mark is around something interesting always happens. After riding elephants through 10 foot high grass to find Indian rhino and Gaur (Indian bison) in a national park where they roam free, I found myself watching Mark handle a rather feisty 10 foot Burmese rock python. As Mark showed the camera some of the interesting features of the snake my local contact, Northern West Bengal’s expert snake catcher Mr Minto Choudhri tapped my arm and motioned for me to look down into the marsh at my feet. At first I was concerned that he wanted to talk and thought of asking him to wait until Mark had finished speaking. Then I looked down. I was standing on the coils of a massive snake. Minto and I called Mark across to see it and the rest is history (you can see the capture in the film). It is the closest I have found myself to such a large snake (4.75metres) before it has been captured, but after you’ve worked with Mark for a while – I trust his snake capturing and handling skills completely – moments like that are exciting rather than terrifying. I’ve only ever seen one larger snake in the wild. If you want to see that one then look at the film “Amazon Anaconda” from the first series of “O’Shea’s Big Adventure”. Mark and his Brazillian helpers carrying the snake through the forest is one of the most bizarre and incredible things I have ever been involved with filming.

One might imagine that capturing a huge Burmese python would be the highlight of the trip. It could have been. The people we met in Bengal, Raj basu, Mr Debnath, Minto and the rest were wonderful company and very knowledgeable about their forests. My highlight though was filming in Chhattisgarhh. I have been to India many times before making films but I can safely say that I thought Chhattisgarh was a magical place. The people and the landscape were a source of joy to all of us involved with the filming.
But filming sloth bears at night was, professionally, as tough as anything we have attempted before on the programme. I have become used to boat to boat and even elephant to elephant filming with Mark but directing a team of seven people (including two Forestry Department guards for our protection) silently in pitch darkness to film a creature that no-one could actually see was a real challenge. Needless to say Mark saw the bears first, with the aid of his night sight. However, Mark O’Shea Stokes the cameraman had to operate a mini-cam through another night scope and view the resulting image on a floor-mounted monitor – all the image intensifiers for our normal cameras were on hire to crews filming the war in Afghanistan. How he managed to get such great images when he couldn’t even look where he was pointing the camera I will never know, but I’m grateful. It is difficult to describe the feeling of being silently caged with Mark while a three hundred pound bear wanders around just a few feet from you, so I won’t try. I’ll let you imagine…
And I never got round to telling you about the bandits on the Chambal river, you’ll have to wait for Mark to write a book! Our adventures would make a good one.