Being a director on O’Shea is one of the best jobs in television. You get to go to some of the world’s most beautiful places, like New Caledonia, Krakatau, and India. You come across some beautiful and amazing creatures, like paradise tree snakes, orb weaving spiders, and giant geckos. And best of all you get to meet wonderful people, like Bob Pullen in Guam, Simon Cook in Indonesia and Mohammed Anees in India, to name just three.
However, it is not without its stresses and strains, and the making of “The Cobra’s Revenge” was no exception… 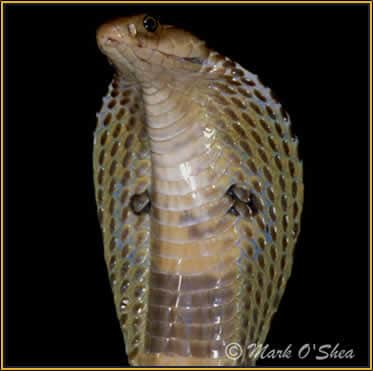 The Spectacled or Common Indian cobra (Naja naja) is widespread throughout South Asia. It is responsible for thousands of fatal snakebites.

Getting permission to film reptiles in India was a long, tortuous and complicated business. In addition to that I arrived in the country on September 11th, and following the events of that day there were chances of the region being sufficiently destabilised for filming to have been called off. Thankfully that didn’t happen, but crucial internal flights were cancelled and airport security was intense and time consuming. The worst moments were when half our filming equipment was removed from the hold just before take off from Bangalore, Swiss Air, who were flying our American expert over from New York, stopping all flights, and Delhi officials confiscating my lucky tennis ball from my hand baggage.
Add to all that the perennial O’Shea problem about whether we’d actually find the snake at the heart of our programme, the rare and elusive king cobra, and you have a very stressed and worried TV director on your hands.
However as filming progressed it slowly dawned on me that we were getting some excellent material. Mark O’Shea was on sparkling form, and the production team of cameraman Richard Edwards, sound recordist Terry Meadowcroft, and Associate producer Matthew Catling, were working their socks off to ensure the pictures, sound and content were top quality.
In Bangalore we achieved our objective of finding many snakes, including several wonderful spectacled cobras. In the swamps of Bhitarkanika we got some marvellous footage of monitor lizards, chameleons and crocodiles, and in the forests of the Western Ghats we miraculously captured a magnificent king cobra as it feasted on a ratsnake.
Luck was certainly on our side in terms of the reptiles we found, the people we filmed, and the wide ranging story elements we were able to cover, including a child playing with a cobra in a snake charming village, an experiment to investigate whether snakes can hear, and a moving king cobra funeral.
Some people say “No Pain No Gain”, and there are certainly elements of this shoot I would prefer not to relive; pulling leeches off my stomach, getting an incredibly painful skin rash from blood sucking insects in my bed, and having diarrhoea for six weeks for example, but at the end of the day I gained so much from my time in India in terms of life experience, friendships, and happy memories, that I would happily go through it all again. I think…