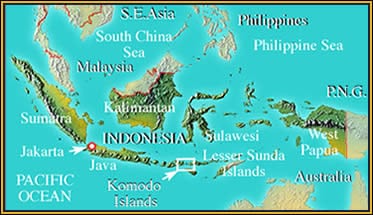 Location: The Komodo islands are located between Sumbawa and Flores in the Lesser Sunda island chain.

Komodo dragons might be amongst the most impressive carnivorous animals in the world but they are also extremely endangered. Fewer than 3,000 exist in the wild on just four islands in a very localised area in Indonesia. A single ecological catastrophe could wipe them out in the wild. Captive breeding programs are underway world wide to ensure the survival of the dragons but scientists are having problems achieving the correct sex ratios in captive populations. Dr Claudio Ciofi is conducting research into the life-history of hatchling dragons, including determining the ratio of males to females in newly hatched clutches by DNA analysis since dragons of both sexes look rather similar. Mark joins Claudio at his nest sites on Rinca and Komodo as he awaits this year’s hatch, which is late!

Mark then travels to the neighbouring island of Padar with Dr Putra Sastrawan. Deer hunters drove dragons off Padar some years ago but Putra has a dream to re-populate the island with dragons again. Once again it will be necessary to understand the natural ratios of males to females in wild populations of Komodo dragons. Apart from dragons the Komodo Island group has several other interesting and dangerous reptile species. 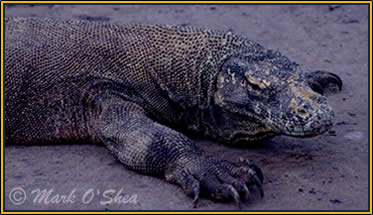 A large Komodo dragon (Varanus komodoensis) is a formidable predator, armed with a powerful tail, long claws and a mouth containing a cocktail of lethally virulent bacteria.