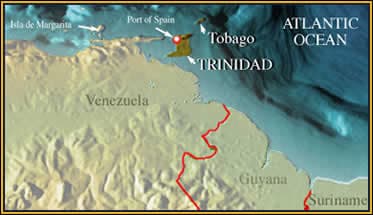 Location: The country of Trinidad and Tobago is located off the Venezuelan coast.

In 1938 “Caribbean Adventure” by British naturalist Ivan Sanderson was published. In his book Sanderson tells how he caught a small lizard in a rocky crevice in the remote Aripo Caves. He writes that, as he drove the lizard out of the crevice , the white-spots down its flanks glowed “like the portholes on a liner”. The story of the Luminous lizard was born but quickly refuted by academic biologists who said it was impossible for a terrestrial vertebrate to emit light. Some set out to destroy Sanderson’s reputation as a competent observer of wildlife and his later interest in the Loch Ness Monster did not help his situation. Mark teams up with retired economic botanist and proud ‘Trini’, Victor Quinnel to investigate Sanderson’s claims, made all the more interesting by the fact that nobody has seen a live male ‘luminous lizard’ since he caught his specimen in the early 1930s. (Only adult males were reported to glow, females and juveniles being less colourful and lacking the red-belly and white spots.) Mark O’Shea and Victor’s first port of call is pay a visit on Sanderson’s guide Capriata, now aged 87, who planted an orange pip on the journey. Capriata is too old to join them on the arduous trek so they are accompanied by local guide Caesar. Mark also seeks out other Trini herps and visits the Caroni Swamp to acquaint himself with the large treeboas that live there.
[Mark also meets Lakatan, whose name means ‘Banana’, a Rastafarian who spent 30 years naked with his family in the Trini jungle. Lakatan introduces Mark to the leatherback turtle beach where his family protect the nesting females and hatchlings heading for the ocean for the predators and poachers. This section did not make the final film.] 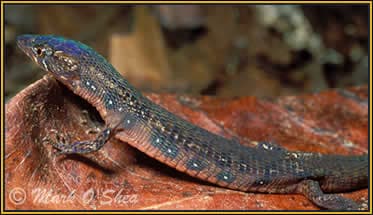