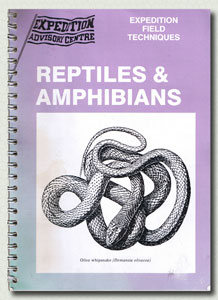 Mark O’Shea was asked to write the Reptiles and Amphibians handbook for the Expedition Advisory Centre’s series of Expedition Field Techniques.
He was suitably qualified to do so as a long-time Fellow of the Royal Geographical Society, the herpetologist on their large-scale 13month Maracá Rainforest Project in Brazil (1987-1988) and a regular contributor, speaker and workshop host at the annual 2-day Planning a Small Expedition Seminars at the RGS in London. Originally these EFT handbooks were to be considerably larger but an editorial decision was taken to edit them down for inclusion as chapters within the annual Expedition Planner’s Handbook and Directory. When this decision was reversed it was too late to re-expand the text. This first edition has now been superceded by a second edition, written by Daniel Bennett, when Mark’s other commitments, publishing and fieldwork, prevented him from writing the second edition.